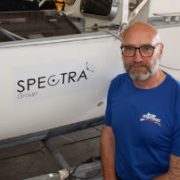 Spectra Group are proud to be sponsoring a former SAS soldier as he embarks on the Row Sentinel Atlantic Challenge – a row of 3,400 miles across the Atlantic with only the sun and stars to guide him.

Ian Rivers, a former SAS soldier from Hereford, is taking on the mammoth challenge without any support or access to GPS. He will leave New York in May and row the 3100 plus nautical miles to the Isles of Scilly. The crossing will test his endurance, navigation and seamanship to the absolute limit, as nobody has ever managed to complete an unsupported solo row of the Atlantic using the Northern Route. He will be rowing for between nine and 12 hours each day and thinks the crossing will take him between 60 and 90 days, using only a sextant and the stars to complete the Atlantic journey. Fierce conditions and facing tropical storms, which are expected every two weeks, make this challenge even more daunting.

The veteran was inspired to take on this epic challenge after using nature as a guide after being kidnapped in Syria in 2013 – he successfully escaped, then navigated his way to safety using natural indicators.

His 27-year military career began in 1984, with the Royal Artillery. A career with 29 Commando followed, before passing SAS selection in 1991 and then finally leaving the military in 2011. Mr Rivers said two decades in the Special Forces took his “fitness levels” and “mental aptitude” to the next level. His time in the Armed Forces fuelled his passion for pure navigation – he became a trained mountain guide and ocean yacht-master, and his achievements already include traversing all the major mountain ranges, deserts and oceans of the world.

Ian Rivers has spent his life seeking adventure. From a childhood he describes as “feral” right through his career in the SAS, he’s always looked for the next challenge. “I wanted to make it a true adventure, going back to how people used to cross oceans 100 years ago,” he said and that “isolation” will rank as one of the toughest factors of the Row Sentinel Challenge. “I don’t particularly like my own company. I prefer the company of other people. So initially, after a week or so, I’ll just get into the equilibrium of being on my own and getting into the routine.” Simon Davies, CEO at Spectra Group commented “We are exceedingly proud to be involved by supporting such a mental and physical challenge that is being completed in support of such good causes. Many of our products are used by Special Forces across the globe, and a number of Spectra employees are ex-military with a specialist background, so we are committed to supporting the services and veterans in any way we can”. He added: “We have provided Ian with a Broadband Global Access Network terminal and satellite airtime which he will use to transmit reports and updates on his progress regularly”.

Or donate to the cause https://uk.virginmoneygiving.com/charity-web/charity/displayCharityCampaignPage.action?charityCampaignUrl=sentinel