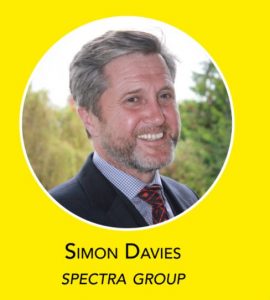 in Ex-Forces in Business Awards

Spectra Group’s CEO, Simon Davies, has been nominated as a finalist in the “Innovator of the Year” category at the British Ex-Forces in Business Awards, taking place on 17 May 2018.

The British Ex-Forces in Business Awards is the largest celebration and recognition of ex-military personnel in the UK workforce and the employers that support current and former members of the British Armed Forces. The high-profile ceremony not only gathers hundreds of business leaders to reveal and honour the winners but also brings together top companies, key military personnel, politicians, journalists and other stakeholders. Together, the event raises awareness of resettlement issues and promotes further dialogue around the importance of ex-forces employment initiatives and promotes the significant value that military-gained skills, if better utilised in the UK workforce, can provide to the British economy.

Presenting the awards at London’s prestigious Grand Connaught Rooms on 17 May will be talkRadio morning show host Julia Hartley-Brewer. The event also welcomes bestselling author and SAS veteran Andy McNab as a guest speaker and other prominent figures such as General Sir Mike Jackson and Simon Weston CBE. Entertainment will be provided by the Military Wives Choir.

“I’m honoured to have been nominated as a finalist in these awards. I’m very proud of my military service but I’m equally as proud of what we have achieved here at Spectra Group since I left the Armed Forces. To be recognised for that is a personal honour but it also very much reflects on my team here at Spectra Group”.

“we find it highly beneficial to offer the well-trusted skillsets delivered by ex-forces personal when tailoring products and services for those operating in high-risk customer environments, such as cyber security and military”.