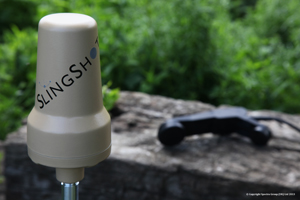 SlingShot® is a revolutionary advance in the provision of satellite capability to tactical radio users. We have been aware for many years that UHF TacSat is a limited resource that is only available to a small number of high priority radio users. As such it attracts a premium price. Also, it is limited in its ability to provide reliable and high quality communications on the move (COTM).

Because of this Spectra worked with Inmarsat to develop a complementary service offering that would provide a global solution for those forces that couldn’t get access to UHF TacSat. In October 2012 we received confirmation from Inmarsat that they could provide an L-band service that met our requirement and from this we developed a working prototype within one month that delivered a TacSat capability using a commercial satellite constellation. Interest in this capability grew quickly as defence users around the world understood the benefits of a capability that provided Beyond Line of Sight global (BLOS) connectivity using tactical radios.

We were pleasantly surprised when we received the notification that we had been short-listed for the best communications for the modern soldier award, as it came only six months after our first demonstration.