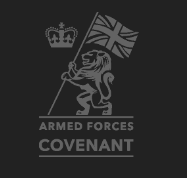 Spectra Group (UK) Ltd are delighted to announce their support of the Armed Forces Covenant. The Covenant serves as a public declaration that allows organisations to show support for the armed forces- by directly helping active servicemen and women, as well as veterans.

Simon Davies, CEO of the industry leading voice and data communications specialist, had the following to say:

“The Armed Forces Covenant is vitally important as we need to ensure that serving personnel and veterans are given our continued support.”

Providing support for ex-service men and women is a top priority for the Covenant, which amongst other acts, seeks to provide affordable housing opportunities and employment for those who have served. 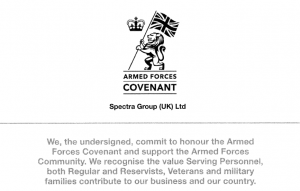 Spectra Group is proud to support the Armed Forces Covenant

Spectra wholeheartedly believes in offering a sense of security to those who protect us, as CEO Simon Davies elaborates:

“The Armed Forces are essential to keeping us safe in what are uncertain times and we must show that they are appreciated and supported even after they decide it is time for a career change and return to civilian life.

Spectra Group is committed to support the armed forces in our charity work, and employs many veterans.”

The Armed Forces Covenant acts as Spectra’s formal declaration of support for the Armed Forces. The organisation has previously shown support through a variety of charity sponsorships, including Soldiering On, Combat Stress, the Square Mile Salute Dinners, and will be sponsoring the SSAFA Race Day at Chepstow on November 2nd.

You can view the signed covenant, and Spectra’s full declaration of commitments, here.