The British Army established AWE20 as a capability spotlight to explore emerging technologies and identify specific capabilities in the agile Command, Control and Communication (C3) space that are suitable for rapid exploitation. AWE20 aims to push the boundaries of technology and military capability, testing a range of systems by putting them in the hands of the user while giving invaluable military feedback to suppliers. Previously known as URBan Experimentation (or URBEX), AWE20’s purpose is to ‘Identify how the Army can exploit developments in technology in the agile C3 arena’. 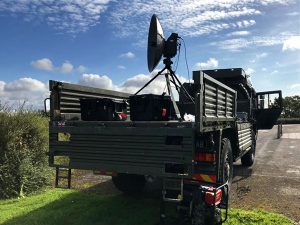 Simon Davies, CEO of Spectra Group said: “It’s an important and prestigious step for Spectra Group to take part in AWE20 with the COMET troposcatter system. Feedback has been very positive  with users appreciating the ease of use, large bandwidth and overall ability to communicate over the horizon in a potentially satellite and GPS denied environment”. He added: “Troposcatter and SlingShot offer different yet complementary capabilities to our users. We’re confident that all of our existing and future customers will see the benefits on offer in using both systems side-by-side, to meet every Beyond Line Of Sight communications scenario”.