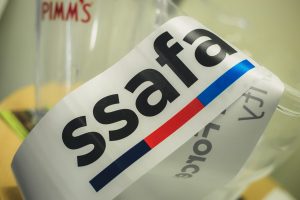 Every year Battlespace organises a charity Race Day at Chepstow in aid of SSAFA, the Armed Forces Charity.

The day consisted of several sponsored races along with hospitality and an auction. In total, it raised over £21,500 for SSAFA.

Spectra Group is a proud sponsor of several Armed Forces charities and is currently working to achieve the Gold Level of the Armed Forces Covenant. The SSAFA Race Day has long been on Spectra’s calendar and, once again, Spectra took a table and a sponsored a race – The Spectra Group Maiden Hurdle. 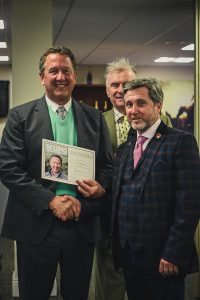 SSAFA provides lifelong support to men and women in the Royal Navy, the Royal Marines, the British Army and the Royal Air Force, and their families. They also work with veterans of all ages to help them settle into life and work outside the Forces.

During the day, as outgoing Battlespace Business Man Of The Year, Simon Davies, Spectra CEO, also presented the 2019 award to Ken Peterman of ViaSat.

SlingShot selected to participate in US AEWE 2019
Scroll to top