US Border Scenario For SlingShot: Littoral 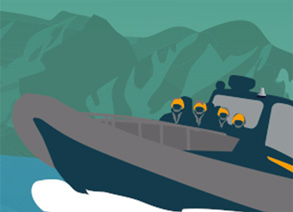 US Border Scenarios for the use of SlingShot: Littoral

Please note: this is a scenario and not historical fact.

Intelligence divisions of both the Department of Homeland Security and the Justice Department have actionable information that a small element of Islamic extremists is attempting to infiltrate the US through eastern Canada.  They plan to utilise small watercraft to cross from Canada into northern upstate New York. Staying within littoral waters, they will cross where the St. Lawrence River and Lake Ontario meet.  Based on this intelligence, the Customs and Border Patrol department of DHS, along with their New York State Police partners, have planned a tactical intercept operation to capture and detain the suspects.

The on-scene commander from CBP makes the tactical decision that commercial satellite communications are a more effective way to C2 and coordinate among the various agencies and across the expanse of terrain.  Spectra Group’s SlingShot/L-TAC system is chosen to provide the COMSATCOM solution for this intercept operation.  SlingShot allows all elements at the Federal and State levels to operate on a single tactical voice network that stretches from Watertown in the west to Massena to the north and back to the New York State Capitol in Albany to the south.  A single spot beam over that area is sufficient to provide the COMSATCOM coverage required.

More SlingShot Scenarios and Use Cases

US Border Scenario For SlingShot: Land
Scroll to top