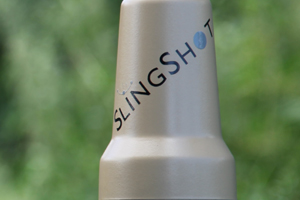 Successful Technology
Designed as a forum to explore how mature technologies available from industry could solve specific problems, the process first identified potential solutions before down-selecting through a Military Judgement Panel (MJP) and then following the proven Level A-B-C approach through a progressive series of demonstrations, tests and trials. Spectra Group’s SlingShot system was one of the successful technologies presented following three rounds of selection.

With the ability to extend the secure net over thousands of miles using Inmarsat’s L-TAC™ satellite service, SlingShot can connect dismounted, mounted and air and seaborne personnel to each other and to operational and national headquarters, the flexible system was trialed in the Warfighting Experiment to demonstrate a solution to communicate further with existing equipment.

Recently referred to by a Specialist user as “a game-changer”, SlingShot enables in-service VHF and UHF tactical radios to operate over commercial satellite communications (COMSATCOM) networks for robust, reliable and cost-effective Beyond Line of Sight (BLOS) Communications on the Move (COTM).

72 Hour Tactical Scenario
The aims of the final stage of the trials was to place the product into the hands of the user. British Infantry, Royal Marines and a squad from the US Army were on hand for the level C trials which included Training, Section Exercises on Salisbury Plain and Platoon Exercises prior to the final Company Battle Exercise in which a Company Grouping deployed for 72 hours in a tactical scenario against a peer enemy force.

“SlingShot is already deployed worldwide and is making a real difference” said Spectra Group CEO, Simon Davies. “As operations change and high-tempo, short duration, deployments become the norm, there is a real need to extend tactical communication distances, as the AWE17 requirements identified. We are very pleased that SlingShot reached the final selection and look forward to its increased use by British Forces.”

American Army Expeditionary Warrior Experiment (AEWE)
Around 2,000 SlingShot units have been operationally deployed since its launch in 2013 to key users and more than 15 armies ranging from North America to Europe and Africa, the Middle East, to the Far East and Australia. The maturity and efficacy of SlingShot is being recognized by its selection in Experiments such as AWE17 and the upcoming American Army Expeditionary Warrior Experiment (AEWE) as national defence organisations look to roll it out on a wider basis.

What is COTM (Communications On The Move)?
Scroll to top